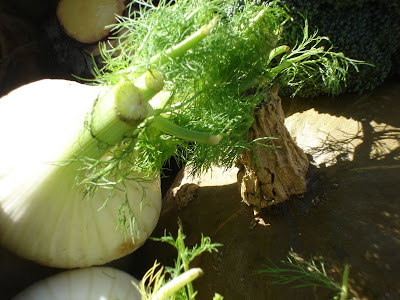 Not long ago we started getting an organic vegetable box delivered from Riverford. The idea behind this was that it would provide

It is something I now have a bit of a love hate relationship with. I love the produce (though have reached my parsnip limit- thank god for spring) but I can't help feeling a little smug and middle class. Its an issue I have about a lot of the more eco-friendly, ethical choices one can make. It often feels like I'm simply paying for them because they relieve a little middle class (student) guilt. And it doesn't seem fair that I get to feel morally superior to people who can't afford to eat differently. Although the organic box works out about the same as what I would spend in tescos on a similar amount of vegetables that is probably only because in tescos I tend to by vine tomatoes and charlotte potatoes. More to the point the price comparison does not come out well on, say, green and blacks chocolate, farmers market milk and butter, or free-range eggs. Once we get to organic ready meals the price issue has really got ridiculous, which is fine for me, because mostly I have the time to cook for myself. But that isn't true for everyone.

Its tempting to ask when food got so political, but its probably always been. More new is the idea that the food choices we make are moral choices. So buying organic equals good, not buying organic equals bad. The philosopher in me thinks that this is just too simplistic, and very confused from a moral point of view.

Organic produce from a supermarket may help you in that you aren't injesting pesticides and fertilisers on such a grand scale, but it doesn't guarentee less food miles, less packaging, or a fair price for the producer.
On the other hand non-organic produce from the famers market, or even the local grocer may well be less packaged, and have travelled less far, though its likely to have been sprayed. My point is that organic produce may well be a good choice from a self-centred point of view - I get to eat less pesticides - and may have some benefits in that land is not so intensively farmed. But it doesn't guarentee anything on what seem to me issues which affect everyone: food miles and packaging; much less guarentee a fair price for the farmer. These, it seems to me, are real moral issues, in that their outcomes affect others, not just myself. It seems to me that if we're going to get moral about food, we need to look at the complexity of the issues, because like most moral issues, it isn't simple. You only have to look at 'organic' salmon to see that.

Still, I think what makes me happiest about the veg box is not knowing what I'm going to get. I went to the farmers market yesterday and bought a big bunch of tightly packed purple sprouting. But it didn't make nearly as happy as the big box of surprises which arrived today. Lovely little tightly packed fennel, paper skinned shallots, brocolli, and leeks among the root vegetables.

And just like that all my doubts fell away...
Posted by Paula at 17:24

How about trying a small local scheme instead of Riverford/River Nene etc?

Only Organic or Veg in Clover spring to mind.