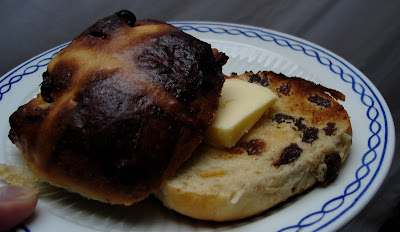 I've been looking forward to making these. Last year they were lovely and I've been waiting it out until we're resepectably close to Easter. If I'd been organised I would have got these done for Mothering Sunday, as they'd be the perfect thing to wake up to. But I'm not, so instead they were afternoon tea for family who stayed the weekend with us.

Use a large bowel as the starter will rise considerably. For the ferment starter whisk together the egg and water, then add the dry ingrediants and leave in warm place for 1/2 hour covered with a tea towel.The mixture should rise considerably as the yeast works its magic.

To make the dough you can add the starter ferment and all the ingredients to the dough to a bread machine on the dough setting. If you wish to knead it by hand then first rub in the butter to the flour, then make a well in the centre of the dough and add the zest, ferment starter, spices, salt and sugar. Draw the dry ingredients into the wet with your fingers until the mixture comes together then turn out onto a floured surface and knead until the dough is smooth and elastic. At this point knead in the dried fruit.
Now return the dough to the bowl and place it , covered lightly, in a warm places until it doubles in size (about an hour). When it has risen turn it out again onto the floured surface and knock back the dough. The idea is to lightly knock some of the air out of the dough so it lessens in size. Shape it into a ball an cover in a warm place for half an hour to rise again.
Finally turn it out onto a floured surface again and divide into 12 equal pieces. This is the point to return to the recipe if you've been cutting out work with a bread machine.

Shape the pieces into balls and place them on a well greased baking tray, with space between them. Flatten each slightly and score a cross in the top of each, then cover with a tea towel, leaving in a warm place to rest for about 40 minutes. Meanwhile mix together the topping for the crosses and turn the oven on to 240oc to preheat.

When the buns have risen drizzle the topping over the lines formed by the crosses. Out the buns in the oven and bake for 10-15 minutes until golden brown. To make the glaze dissolve the sugar in the hot water. When the buns are cooked remove from the oven and immediately brush with the glaze. The buns can then be eaten warm straight away, or cut in half and toasted later (in which case the sugar in the glaze is likely to caramelise a lot in the toaster so watch them carefully- they have a tendency to get brown rather quickly as in the photo above).


Spring has officially sprung... I went for a walk and collected big branches of blossom 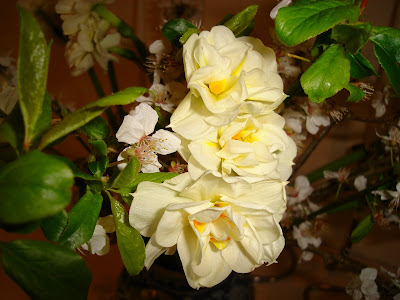 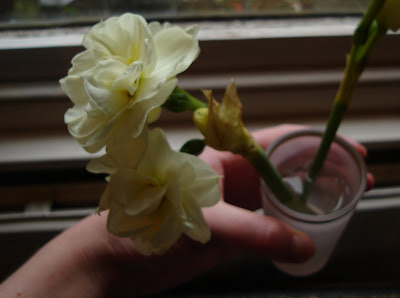 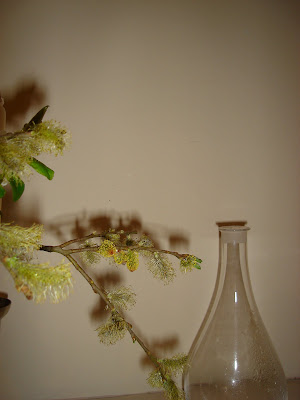