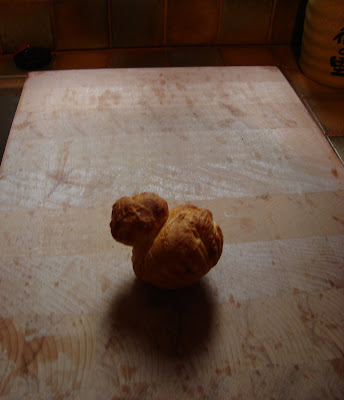 The light has definatly changed in Oxford: a warm autumnal glow in the evening and crisp, crisp blue skies in the morning. The air has changed too, its sharper somehow, and no matter how warm the late afternoon sun might be, it would be silly to venture out without a cardigan and scarf.

Sunday found me holed up at home, jumper and socks on and heating full blast to beat the chill, playing with yeast. Our new breadmaker whirred away as I type, knocking up a little brioche dough for me to play with.

All mixed together in the bread maker on the dough setting. My bread maker requires liquids to be added first, but some start with dry ingrediants. The dough was then shaped into pairs of large and small balls, popped small on top of large in greased moulds and left to rise for half an hour. It was then glazed with an egg wash before being baked at 200 oc until golden brown.

Few things beat the smell of baking bread on a cold sunday afternoon...and brioche only makes it better.

I had meant to take photos, but in the end ate most of the brioche before I got my camera out. The photo above is of the last lingering one, while below are the moulds I've just washed up, a little knackered, and not quite brioche moulds, but fitting the bill. 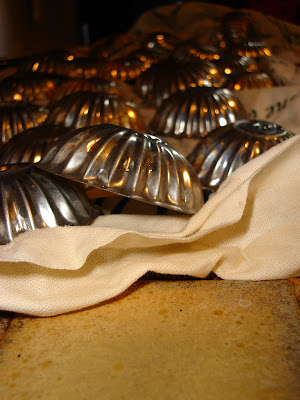 Good intentions do not write blogs. August and September have been a blur, moving house being probably the most major upheavel. It sounds kind of lame when written down, but it meant that most of my kitchen spent its life in boxes for several weeks, and is only just emerging into my nice new kitchen. But on the plus side it now means I have an electric convection oven instead of the hateful gas one which plotted against me to ruin my baking at every opportunity. Not only that, but my kitchen is actually big enough to house a kitchen table, which is the fulfillment of what had become a surprisingly heartfelt desire (seperate dining rooms several doors away do not make for domestic bliss).

So, down to the cooking. In truth, I have been slaving away about 60 hours a week in a local deli, which has honed my chopping skills somewhat, but has meant that when I come home I tend to demand food rather than cook it. A has consequently been doing a lot of the cooking. So, although I pretty much missed the joys of redcurrents, blackcurrents, and the last of the raspberries, I'm looking forward to the figs, beautiful greengages and damsons which spell this time of year. Not only that but the winter veggies are beginning to appear, and s
Posted by Paula at 21:47 No comments: