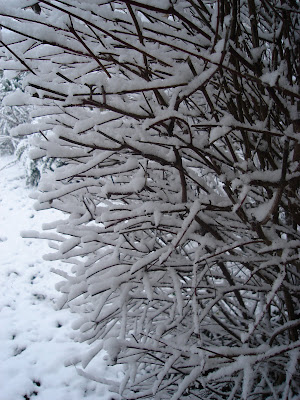 Doesn't it look like beautiful! It was bitterly and unexpectedly cold. The plan was ill-conceived, being formulated the day after a heavy bout of Caparinah drinking courtesy of my brother. Nursing our heads, groggy and fed up of Oxford we planned our escape to Laprade. 'Won't it be freezing?' asks bleery eyed me, but A is adamant that he was there two weeks ago and it was a balmy 15 -17 degrees (his description of this as 't-shirt' weather should have set of alarm bells). Looking outside at the permanent rain engulfing Oxford this seems like a fantastic idea, we plan days of cycling off the foie gras, and nights of fires, duvets and confit.

Well, the food part goes according to plan, but, as swathes of France are covered with snow, schools and roads close and the temperature drops cycling, trips go out the window. I can't complain though, I get like a toddler in snow. As soon as it started I was out in the garden endangering my toes and fingers and snapping away. I even attempted a snowman but it was too powdery. A was defiant to the last and spent much of the holiday trying to convince me that table tennis was a winter sport, while shovelling snow out of the way of his cricket net so he could practise bowling. The passing french population greeted this with bemusment. 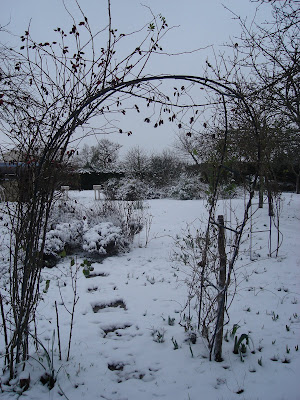 Mostly though, we stayed in, slept, cooked, ate, and made daily excursions to Aubeterre to stock up on bagettes, steak and confit. We cooked lots: seared duck breasts with grilled chicory and pan fried apple; confit de canard with petit pois; steak with shallots; beef bourgignon left gently simmering during a 15 km walk; goats cheese salads with chicory, pear and walnuts; sausage cassarole; rillettes with cornichons.

In short it was a fabulous, wintery and much needed break. Crisp walks and woollen socks made it perfect.
Posted by Paula at 14:12