Wet garlic is the new seasons garlic, a little premature, and with a sweeter, more rounded taste. Its leaves can also be eaten, gently sauted or raw for a more powerful kick. It came all prettily tied up in a bunch in our organic veg box this week.

My father had given me a pot of dill pickles to try. Instead of the normal added ingrediants these are cultured dill pickles, alive in the same way yeast is. Pickles are something I almost instinctively avoided as a child, perhaps because the first time I encountered them was bedecking an overdone hamburger, a sad and sorry little piece of pickle if ever I saw one. The pickle was ingrained in my food memory as soemthng distinctly unappealing until I was served a little homemade rillettes de canard with a side of pickled cornichons. Mainly because they were so miniture and cute, I tried one and realised what it was all about. Sharp pickle enlivens, cutting through the fat, bringing out the flavour of the meat.
Since then I hardly ever eat pate without pickles (pickled walnuts are also a favourite). The joy of pickle with potato was discovered at a friends house when she served a very rough mash, complete with chunks of pickle, onion and boiled egg. Comfort food at its best. 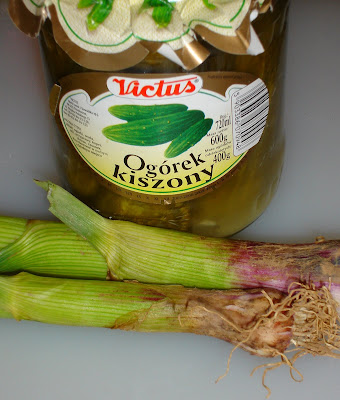 A little potato salad seemed an appropriate way to combine both. Potato salad , too, is something I only came round to when I realised that slathering it mayonaise was entirely optional, and that a healthy glug of olive oil did the job just as well. I'll eat most foods, but mayonaise is usually store bought and awful, something akin to eating flavourless and aerated oil. Homemade mayonaisse is almost an entirely differnt thing, great to dip a chip in, rich and tasty. Such mayonaisse though, is encountered even more infrequently that bearnaise or hollandaise, and its usually the stuff out of the jar, slathered on thick, that makes its way onto potato salad.

Chop the wet garlic and parsley finely, and the dill pickles a bit more coarsely. Its best to add these and the olive oil to the potatoes while they are still warm, as they seem to absorb the flavours better. Season with salt and black pepper. 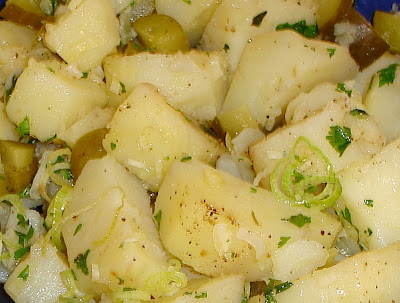 You said these are cultured pickles--are they Polish? Do you know what word on the label indicates that they are cultured (so I can search for them)? I have also been dying to find a cultured French-style cornichon to eat with pate, for I, like you, can hardly stand to eat one without the other (and I know how to make my own pate). I have been growing my own cornichons parisien, so all I need now is a recipe to culture them (let me know if you want seeds or seedlings--they are sprouting as we speak but I still have some seeds I didn't use). Thanks!

I have used some of the recipes from Sally Fallon's book, Nourishing Traditions with good results.

There is an entire chapter on lacto-fermentaion that includes a recipe for cucumbers.

I think you'll enjoy the process and the results (and your pate even more).

I would like to grow some cornichon de paris next season. Could tell me where to get some seeds?