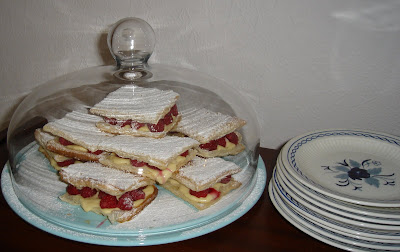 A little sun and many good friends provided the excuse for a weekend of spring baking.

To make the creme patissiere beat the egg yolks with the cornflour and sugar, while bringing the milk to the boil. Take the milk off the heat and pour in a steady stream onto the yolks, gently beating to stop lumps. Pour the mixture back into the pan and heat, stirring continuously, until it reaches the boil. Taste to make sure the cornflour is cooked, and that it is sweet enough. Then leave to cool, allowing a little knob of butter to melt over the surface to stop a skin forming.

Heat the oven to 200 oc. Roll the puff pastry very thinly and cut into equal sized pieces. Each mille feuile will need at least two pieces. Place on a baking sheet and bake until the pastry just begins to puff, then place another baking sheet on top of the pastry to stop it rising and return to the oven for another 5-10 minutes until lightly golden. At this point the pastry may have sugar sprinkled on it and be returned briefly to the oven to caramelise, or may be left plain to be iced or dusted with icing sugar when cold.

Lightly whip the cream until peaks form and combine with the (cold) creme patissiere. Once the pastry is cold pipe the creme patissiere onto one piece, top with raspberries and lay on another piece. For those with architectural abilities another layer may be added, but my balancing abilities only run to one layer.

Since making about 500 profiteroles for a friends wedding many years ago I've perfected my profiterole making and baking. There are several tricks to perfect profiteroles. The first is to avoid baking the profiteroles in a damp room, or on a wet day, as they will absorb the moisture in the room making them soggy and lacking bite. The second is to prick a small hole in the bottom or side of the profiterole to allow the steam to escape, and return them to a very low oven (50-100 oc) for 5 -10 minutes to dry out. If you decide to make big choux puffs a small spoon must be used to remove the slightly undercooked middle instead of mrerely pricking them. The final thing is to only ever bake them on the day of eating them and to fill them as close to eating as possible. This may all seem fiddly and precious, but it makes them perfect, and the baking itself is easy for anyone to do.

Put the water and butter in a pan and bring to the boil. Add the flour and mix vigourously to remove lumps until the mixture comes away from the sides of the pan. Remove from the heat and allow to cool for a moment. Then make a well in the centre of the mixture and break in the eggs, mixing to combine.

Heat the oven to 180 oc
Pipe onto a well greased baking tray, taking care to leave space for the profiteroles to rise. If there are peaks from the piping pat them down with the back of a spoon dipped in water. Bake until risen and golden, then prick a hole in them and return to a low oven for five minutes. Cool them somewhere dry and leave to use until the last possible minute.

I filled these with the creme patissiere and cream mixture I have used in the mille feuile, adding the strained juice of 4 passion fruit. They were lovely, all delicate, creamy and fragrant.
Posted by Paula at 17:07

Just discovered your site and enjoying it. I've been trying all day to make a perfect profiterole but although I'm coming close I keep finding the middle is very slightly undercooked white the outside is crisp. How long/temperature do you bake them for? I'm going straight back to the kitchen to test your recipe!