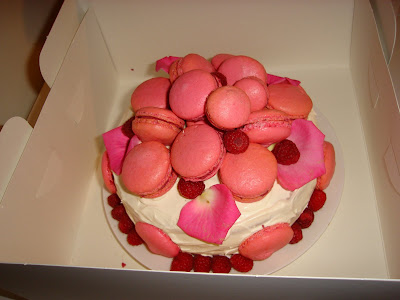 My best friends birthday was on Thursday, and as she loves Macaroons, particularly those from Laduree, I decided her cake just had to be decorated with them.

Now I've tried at various points over the past year to bake the perfect macaroon, but success has been elusive. They are currently my baking holy grail, but thus far I haven't even managed to get a recipe that gives consistent results, and I've tried a few.

I'll share with you the most successful recipe at the end, but first I have to have a little rant about Gordon Ramsey. Now, Ramsey is pretty successful over here in Britain, and mostly I like his recipes, but his recipe for Macaroons is just wrong. Not only did the results not look like macaroons (no feet see?) but they didn't taste like anything approximating a macaroon. While my trouble with most recipes was that I'm a perfectionist, and they didn't give me macaroons with crumbling feet and shiny tops, Ramsey's Macaroons tasted like eating cardboard. Perhaps this is the beginning of the fall of the empire...

All this macaroon baking meant the cake supporting them had to be pretty simple and quick to bake. A victoria sponge filled with more raspberries and cream seemed a simple foil for the macaroons, and countered their sweetness nicely. 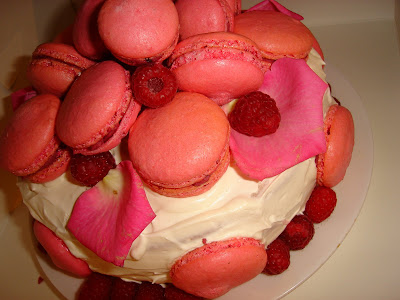 So finally here is the recipe that (finally) worked for me. Worked so well, in fact, that now I'm getting excited about all the other flavours I can knock out. I based my recipe on one which appeared in The Times newspaper, written by Lucas Hollweg
Posted by Paula at 16:16

That's very interesting, because I was sceptical about Gordon Ramsay's recipe (in "Just desserts") as it had a pure egg not a meringue base, yet they have been the most reliable yet... especially if you beat the eggs into oblivion (that stage where you believe the eggs are about to go all lumpy - like when cream is overbeaten and looks like it will turn into butter). Beautiful little feet and shiny tops (so exciting that I hunted down my father and insisted he looked at them, even though he'd never seen a Macaron before, nor has any interest in baking.

Thank you for posting this.... I can not wait to try this recipe, I am an avid lover of this beautiful piece of heaven. I spend many holidays searching patisserie's for them.
Emily

Beckie - this was just my experience, as I remember with the chocolate macaroons. I'm glad other people had more success: I found it really frustrating.

Anon- glad you liked it. I found the recipe the easiest of the macaroon ones I tried, though a little fiddling and watching of the oven is needed as timing is pretty key. Similarly if you over-stir the batter after adding the almonds then the macaroons tend to be a bit flat (and in contrast if they rise too much, or don't get feet, then stirring a little more helped in my experience).