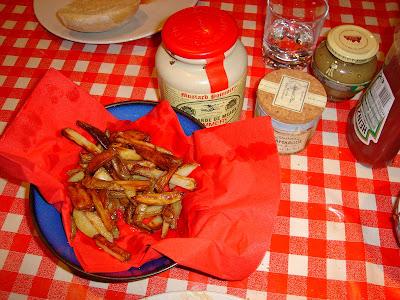 Every so often I go past a kitchen shop and get drawn in by the idea of a deep fat fryer and wander home dreaming of tempura, and onion rings, and battered fish, and chips. And, even though I know it is BAD and will surely lead to BURNs I attempt to convince A with my dreams of freshly fried goods. Which is the point at which he lists the terrible things that happen to people with deep fat fryers, a tale in which if you don't immerse some part of you in boiling oil, or burn your house down, the mentioned freshly fried goods lead to obesity, and heart disease. And in this way we have so far resisted temptation.

The downside of this is no fresh chips, double fried and crispy. So we have developed a way of cooking them which, though unlikely to ward off obesity and heart disease, is (or at least feels) marginally less dangerous than a vat of boiling oil. So we cut our chips from potatoes, skin on, making sure they are of even thickness. And then we whack the temperature on the oven as high as it will go (a measly 220oc), space the chips out on a baking sheet, and spoon on a couple of generous dollops of duck fat and shake them around to cover before popping them in the oven. 30-40 minutes later and hey presto, chips. These easily rival your average home-made restaurant chip (it may be the duck fat) though I admit they do not rival the wonderful chips at La Tupina in Bordeaux which double fries its chips in duck fat. 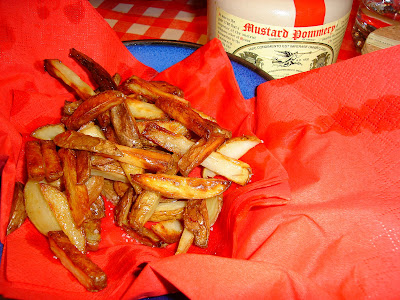 Anyway, we ate lots of these last night, with suitable lashings of fleur de sel and mustard (and ketchup for me because I am a philistine). They were great with the last of the beef burgers from our Riverford Meat Box and fresh bread rolls that A made, although as you can imagine both of us were rendered unable to move from the over-consumption of beef, potatoes, duck fat and bread. 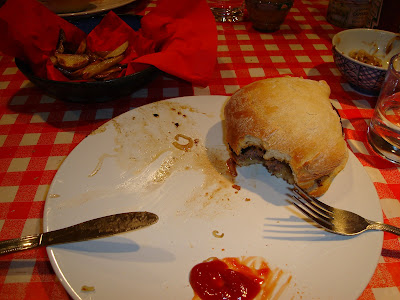 A real cheats burger and chips would have been take-out from McDs but I much prefer your version!!