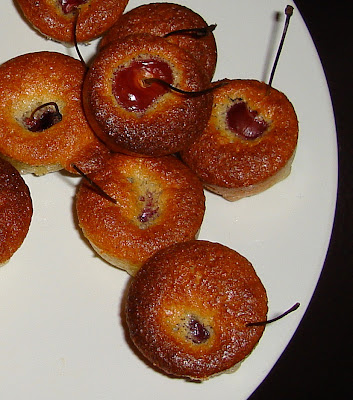 These are inspired by Clafoutis, with a cherry imbedded in each tiny madeline, the stalk poking out as a handle ready to pop each one into your mouth.

I love madelines simple and plain, but a little fruit complements the light cake wonderfully, and, with the almonds, cherries are an easy choice. I played with a Gordon Ramsey recipe for madelines from his Just Desserts cookbook, increasing the ground almonds, reducing the flour, and using a little vanilla to flavour rather than the lemon zest he suggests. if you wanted to make them more dessert like, then we all agreed that a dash of kirsh in the madeline batter would go a long way.

Just warm from the oven these made scrumptious little bites.

Heat the butter in a little pan over a low heat until the solids seperate and then brown. Strain the butter to remove the browned solids, and set aside to cool. In another bowl whisk the sugar with the eggs until they are light in colour, and leave a trail when drizzled over the surface of the mixture. An electric beater is a godsend for this job. If you don't have one don't be tempted to give up at an early stage as this is what gives the madelines their lightness. Fold the flour and almonds gently into the egg mixture, being very careful not to knock out the air. Lastly fold in the cooled, but still runny, butter. Leave to sit for two hours. Meanwhile heat the oven to 190oc, and butter the madeline moulds. I used half the mixture to make plain madelines, and with the other half I made cherry madelines, but in little cake moulds rather than the traditional madeline mould. 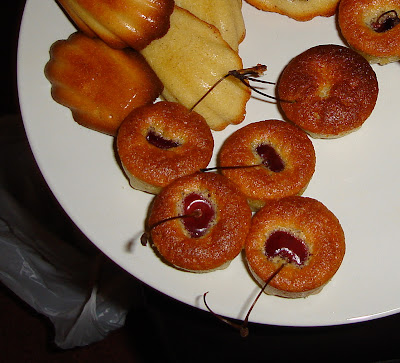 For the plain madeline simply spoon the mixture into the moulds until they are two thirds full and bake untl golden brown. For the cherry madelines also fill the moulds until two-thirds full, but then pop in a whole, unpitted cherry with the stalk attached. There is no need to push it down more than half-way into the mixture: as the madeline bakes the mixture wil rise around it. Bake until golden brown. Remove from the oven and leave to cool for a few minutes in the moulds, then turn out onto a rack to cool more. They are best eaten warm, with a mug of tea or coffee, but can also be kept in an airtight container, in which case I like to just warm them slightly in a very low oven before serving them to take the chill off them.
Posted by Paula at 08:21

What a brilliant idea! I love making cherry clafoutis and these seem to be a perfect canape-sized take on a classic dessert. Best I make a bathc before the cherries are all gone!