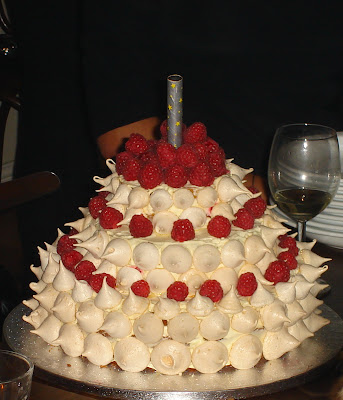 It was a friend’s birthday a few days ago, and we all decided that in celebration of his advancing years we’d book a restaurant, get dressed up, and go out for the evening. I was on birthday cake making duty, which is something I love to do. The thing about birthday cakes is that they aren’t ever meant to be serious. Silly, celebratory and over the top is good, but pared down minimalism isn’t what is called for.

When I was little my mother would indulge my sweet tooth ad make layers of almond daquoise and fill them with a praline coffee cream for my birthday cake, decorated with piped whipped cream and swirls of caramel. Or icecream bombs with layers of different flavours. She even attempted a volcano for my brother, complete with fleeing lego figurines and fireworks.

Now I often make daquoise, or layered chocolate cakes for birthdays. They are easy to make for a crowd I find, so rich that all you want is a sliver of cake. But this time I decided to go down a different path: layers of sponge with cream and raspberries, decorated with merigangues and more raspberries.

Firstly I made a whole lot of meriangue and piped little meriangue kisses on silicone paper and baked them until they were almost completely dried out. 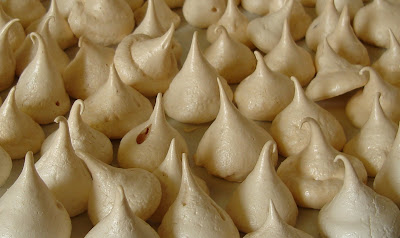 Then partly because I don't have a big enough cake tin to feed 30 people, and partly because it seemed like a fun idea, I made three sponge cakes in different sizes. At the last minute I split each into two and layered them together with raspberries and cream. Then I covered the whole lot in a thin layer of cream to allow the meriangues to stick, and covered the lot with little meriangue kisses and some plump juicy raspberries. 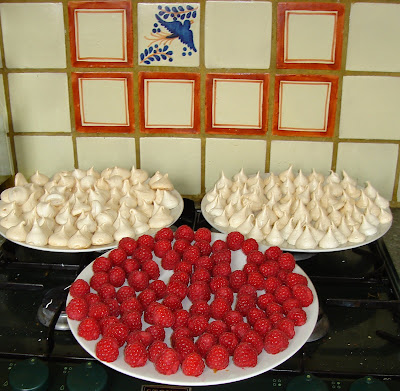 Simple, but effective. I got a bit worried about my sponge layers at the bottom sinking under the weight of those on top, but in actual fact they held up admirably, and the raspberries and cream kept the cake nice and moist.
Posted by Paula at 14:38

This looks amazing Paula! I hope getting it to the restaurant in one piece wasn't too stressful!

What a cool looking cake. It looks like a big fluffy skirt. If it had been for a girl, you could've put a doll's body on top of the cake.